As we are, or become, awash in visual images then understanding the “operations” of visual perception are likely important starting points for developing a complete visual literacy and communications framework.  By understanding some principles of how we see, then we can start to talk in a more informed way about visuals, business and the way we communicate using visuals.  I’m no scientist but let me take a stab at putting together an understanding of how visual processing and perception works.  Then we can also look at more implications for developing an approach to visual communications (For other posts in this series about how we start to think and talk about visual communications, see these)

Visuals Come Before Language:  Start with childhood.  A child looks around a room and recognizes objects before he or she speaks.  In fact, learning language actually requires using visual cues and recognition. The alphabet is a series of visuals that we learn in order to use language.  Not only did we have cave drawings as a means of communication before we developed languages, we also use imagery to build language.  However, our eyes are actually the last senses to evolve.   The fact remains that seeing and understanding what we see is a highly complex — and in some respects, still a mysterious process.

The Process of Vision: Millions of visual signals hit our eyes and get passed along to the brain along optic nerves every second of every day.  When light hits the eye, the processing of images begins.  Visual information from the retina is relayed in complex ways and to various places in the brain.  Understanding that processing of information at various places in the brain is still a work in progress for scientists. 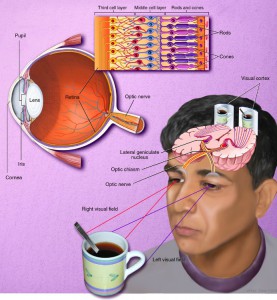 The Raw or Primary Processing Starts with an “old” Brain Pathway: About 10% of the visual information proceeds quickly and immediately along a short pathway to the brainstem that we have in common with reptiles  — hence its’ reference as the “old” part of our brain.  It is called the Superior Coliculus.  It’s at the front of our brain. It tells us “where something is located” and serves as our quick alert system identifying orientation (right side up or upside down, is what we see coming at us or not). It tells us only that we are standing upright and to move if a car is coming at us (although it does not actually tell you that it is a car or that you are standing in the street). It is pure orientation with none of the details or specifics related to the orientation.

The Secondary and Advanced Processing System in the Brain: The remaining 90% of light impulses head off to the newer part of our brain called The Lateral Geniculate Nucleus which is located across the front of the neocortex and known for analytic decision making.  As the visual stimuli head through this section they are categorized and sent through to the visual cortex at the back of our brain for the definition and determination.   In more than 30 regions in the visual cortex the detailed and defining processing of vision takes place. The primary visual cortex is densely packed with cells in many layers. The middle layer receives messages.  The cells above and below this layer respond to stimuli in the shape of bars or edges and those at a particular angle (orientation). Studies have shown that different cells prefer edges at different angles or edges moving in a particular direction.  While the visual processing mechanisms are not completely understood visual signals are fed into at least three separate processing systems.

Studies show that the perception of movement, depth, perspective, the relative size of objects, the relative movement of objects, shading, and gradations in texture all depend primarily on contrasts in light intensity rather than on color.  Also, much of the processing of visual information is automatic and independent of what we know, think or expect.

Visual Processing = Right and Left Side Brain: Worth noting that it appears that visual processing takes place on both the left side (rational and analytic thinking, written and verbal language) and the right side (patterns, spatial recognition, and the creative and emotional thoughts) of the brain. In fact, part of the reason images are so powerful is because our mind reacts differently to them than it does to words.  Studies have found that the human brain deciphers image elements simultaneously, while language is deciphered in a linear, sequential matter.  Processing language takes more time than processing images.  According to a recent 3M study, images are processed 60,000 times faster than text. Lesley Stahl of CBS’ ”60 Minutes” recounts that a story she reported on about President Reagan that was quite negative, yet was seen by the Reagan team as actually very positive. The pictures were terrific and the Reagan staff told her no one heard what she was saying. As Al Tomkins notes, a person watching a plane crashing and bursting into flames is processing the image, they are not listening to the words.  (Source: PBS “Illusion of news” by Bill Moyers, reported by Al Tompkins in Aim for the Heart.)

We Process Images Really Fast: As recently as January of this year, Neuroscientists from MIT found that the human brain can process entire images that the eye sees in as little as 13 milliseconds, far faster than the 100 milliseconds suggested by previous studies. This new evidence of such rapid processing speed tells us:

“what vision does is find concepts. That’s what the brain is doing all day long — trying to understand what we’re looking at,” says Mary Potter, an MIT professor of brain and cognitive sciences and senior author of the study…At the highest rate, subjects were seeing new images more than 20 times as fast as vision typically absorbs information. “We think that under these conditions we begin to show more evidence of knowledge. “ Source: http://newsoffice.mit.edu/2014/in-the-blink-of-an-eye-0116 .  The study appears in the Journal of Attention, Perception, and Psychophysics,

You Have a Photographic Memory: Not only is our vision super fast, its uses “knowledge” and is “informed.” Vision is also strongly “memory” oriented.  When it comes to images (not the details of each image but the general picture) most of us actually have a “photographic memory.”

“In a typical picture recognition study, subjects are shown a number of scenes — such as images cut from a glossy travel magazine — each of which is presented for a second or two. In the test phase, subjects are shown a second set of scenes, half of them from the first set and the other half presented for the first time. The task is to identify members of the second set as old or new. Subjects perform very well on such a task, even when thousands of pictures are shown [3,4].” Source: Visual Memory, Jeremy Wolfe, What you Know about what you saw

Visual Processing is Systematic: Studies suggest that our visual processing system is exactly that – a system that continuously organizes the whole scene even though we may only be focused on a small part of that overall scene.  Our visual systems put together the overall picture for us, even if we have not focused on every element of it.  The vision system may be complex but is sophisticated and collates a series of data points and puts it all together fast efficiently and effectively (most of the time). 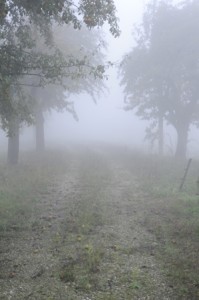 Some Preliminary Thoughts: Implications of Visual processing for Visual Literacy and Visual Communications As you know this series on visual communications is a work in progress and I am sharing as I research and work through information. The observations in this post are things that come to the forefront based on visual processing.  Each post in the series continues to open possibilities.  The thoughts I draw from diving into some brain science about visual processing are:

What other thoughts do you have as we think about developing a framework for how we approach visual communications?

Dan Roam, The Back of the Napkin. and Dan Roam’s Website,