The use of social media is not all about marketing per se.  It is also about reaching people to share views and impact opinions.  In that respect, it is not just social marketing, it is also about social corporate communications and public relations.  Several news items involving Pope Francis and President Obama over the last week showcase the smart use of social media to share views, impact opinions and reach people in new ways–beyond relying on traditional media relations.  They also underscore the need to integrate social media strategies into PR and corporate communications strategies rather than treating social media as a simple add-on tactic. 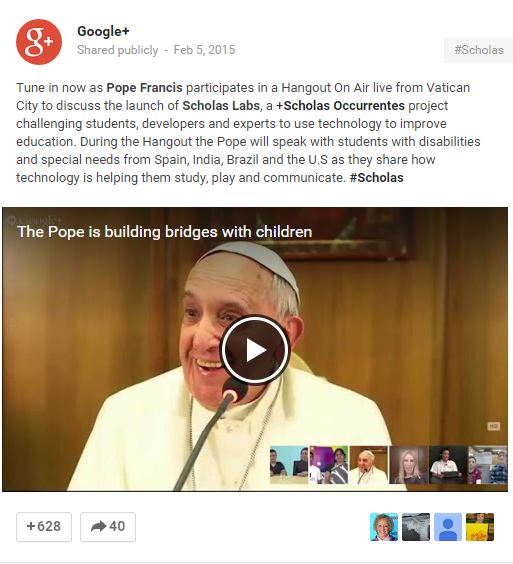 The Pope: The Pope used Google’s Hangouts to discuss the launch of Scholas Labs and Scholas Occurrentes — projects challenging students, developers and experts to use technology to improve education.  B.L Ochman points out that he used this venue to connect directly with students with disabilities and special needs from Spain, India, Brazil and the U.S, to discuss how technology is helping them study, play and communicate.

While BL Ochman talks about the technology and use of hangouts going mainstream, I think the other side of that coin is that Pope used Google Hangouts to connect across several countries (multinational in nature), as well as to connect directly with a very specific and targeted audience.  In doing so, he by-passed the need to use traditional mass media. Social media tools connected him in a global context with the community that is directly associated with this initiative.

Perhaps my interest here is because of a previous career in politics. However, I often think that political communications is often more sophisticated than business.  That’s because in politics, votes are the products and you only get them if you communicate and deliver. I have often thought that business could learn alot from political communications — from aspect such as storytelling, highlighting people in speeches and the focus on constituent groups and connections with them.  Clearly, the Obama team are no novices when it comes to using social media electorally as many a case study and write up have shown.  In that respect, they not only used used social media effectively, they also applied data better than most businesses do today in terms of targeting and follow through.

The Integration of Social Media into the Overall Communications Operation: In the recent New York Times story about Obama’s long time communications aid Dan Pfeiffer departing the White House, the Times points out that Mr Pfeiffer “brought to the job an almost obsessive preoccupation with disseminating the president’s message and a zeal for harnessing technology to find new ways of doing so.” The story goes on to note:

“Before he leaves, Mr. Pfeiffer plans to complete an assignment the president gave him last fall: delivering recommendations for integrating the White House’s social media strategy with its communications operation.  In 2009, Mr. Pfeiffer was the first member of Mr. Obama’s team to propose breaking news by blog, and he was the leading advocate during the 2012 re-election campaign and the second term of using Twitter to get the president’s message out. More recently, Mr. Pfeiffer has experimented with using social media platforms to promote the president’s proposals.”

Experimentation, integration and adoption are the key words above.  That implies going beyond simply undertaking some social media tactic tied to the communications plan. Look at the smart and savvy use of social media in and around the State of the Union Address.  As my good friend David Armano noted on Medium, the White House continues to reach people where they are versus just relying on traditional media coverage.  In the past reaching people where they were meant going around the national/DC press to do local newspaper, TV news and radio.  Today, it means connecting on YouTube and Twitter and finding a way into your social media stream.

From releasing news on blogs, using visuals in tweets, the widely questioned YouTube interviews (by the way, if you thought the YouTube interviews the President undertook were weird because you read or saw something in traditional media outlets about that you might want to read this post), or the occasions where the Whitehouse has used its own photographers and shared special meetings and events on their social media properties, the Whitehouse Communications efforts using social media are broad and strategic.  As Armano notes “many of the strategies and tactics are not new — they are simply planned and executed with the understanding that many efforts vs few now need to work in concert, and a message can be “controlled” more than you think if the right levers are pulled at the right time.”

The Impact of Social Communications: Dan Pfeiffer notes in a another New York Times story, “To not have an aggressive social media strategy in 2015 would be the equivalent of not having an aggressive TV strategy in the 1950s.”  In that same New York Times story, the Whitehouse officials also noted that their use of social media to communicate was having results in how they connect with their stakeholders.

“The results have caught the attention of the president’s most senior advisers, who are increasingly turning to the digital team for guidance on how technology can help Mr. Obama better connect with the public, officials said. “Not only have the digital tools become more important in communications generally, but the people in the building want it more and are asking for it,” said Kori Schulman, the director of online engagement.

The Emerging Media Outlets Gain More Credibility: But it is not just about the smart and strategic use of social media tools that point to a savvy adoption and integration of social media into the Whitehouse’s communications efforts.  This week two of the “new media outlets” (Vox and Buzzfeed – new news outlets mentioned in a previous post here) had their first interviews with the President.  The New York Times noted that Buzzfeed and Vox are now recognized as serious news publications.

As might be expected, Vox media’s interview with Obama was previewed with a video clip and infographics on Facebook over the weekend.  By Sunday evening, the video had already been viewed more than 320,000 times. Go check out both the Vox transcripts and videos…it is quite interesting in how it has been put together and presented. The infographics, context and more.  Masterful actually.

Vox or Buzzfeed’s format may not be what PR pros are familiar with.  Buzzfeed has asked its readers about questions they want put to the President.  While you can submit questions via email, Buzzfeed also suggests sending in questions visually on Facebook, Snapchat, Instagram, Twitter, or Tumblr. Of course, what would a Buzzfeed story be without some video and The President will also participate in a video with BuzzFeed Motion Pictures — shared exclusively to Facebook.

Lessons Learned:  Here are a few lessons that jump to my mind

As a follow up: The Buzzfeed Video, in a little over 24 hours, had accrued a total of over 23 million views, 600,000 likes, and 40,000 comments. It was also picked up by major news and media outlets worldwide including CNN, Rolling Stone Magazine, the Guardian and the Wall Street Journal.  On February 16 it was sitting at 44 million views.

For context from Variety: “Friday’s preliminary numbers, ABC’s “World News” dominated in the key news demo of adults 25-54 with 2.008 million viewers, followed by NBC (1.701 million) and CBS (1.518 million). ABC and CBS were down about 15% from their Monday-Thursday averages, while NBC was off by about 35%.  And in total viewers, ABC (8.461 million) beat out NBC (7.979 million) for its only nightly victory of the week, with the former down 10% from its Monday-Thursday average and the latter down 20%.While NBC has been the consistent winner in total viewers, the evening news race between NBC and ABC has been very close in adults 25-54.”

3 thoughts on “More Indicators of Change for Public Relations”