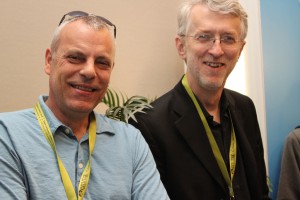 Please welcome the artist formerly known as RichardAtDell to the blogosphere and his own high-value consultancy in social media and corporate communications. Richard Binhammer, as he’s now known, is a PR pro and a visionary.

I inadvertently caused some measure of hell for Dell and Richard when I blogged in 2005 about a lemony laptop, having no idea of the storm that would follow. Michael Dell, just returning to the helm of his namesake company, threw his best people on the case: one person to blog for the company and give it a candid human voice; technicians to read bloggers’ problems, reach out to them, and solve their problems (earning surprised social-media praise); a platform to gather customers’ ideas the company would implement; and Richard himself to seek out, join, and add value to conversations about the company wherever they occurred.

What impressed me most about Richard was his honesty. He would take up whining bloggers’ problems when warranted. He would confess his company’s sins when warranted. But we would also defend Dell when needed. He earned the trust and respect of an at-first-hostile social-media culture. He showed how it should be done. The term “social media guru” is overused but Richard is one of the few who has earned it.

With Richard’s hard work, experience, and credibility, Dell rose from worst to first in the estimation of a skeptical net. He helped establish a social-media war-room that became the envy and object of study of many other corporations. More important, he set a tone that one can still hear in the tweets, posts, and comments of other companies as they try not just to put out fires but also to build new and strong relationships with customers and the public.

Now Richard’s expertise can be yours. As he hangs a shingle over his keyboard, he can bring not only his experience at problem-solving but also his strategic vision for a new age of corporate communications and customer relationships to you. I urge you to envision the benefit of consulting with RichardAtYourCompany,

More about  JEFF JARVIS, author of Public Parts: How Sharing in the Digital Age Improves the Way We Work and Live (Simon & Schuster, 2011) and What Would Google Do? (HarperCollins 2009).  He blogs about media and news at Buzzmachine.com. He is associate professor and director of the Tow-Knight Center for Entrepreneurial Journalism at the City University of New York’s Graduate School of Journalism. He is consulting editor and a partner at Daylife, a news startup. He consults for media companies and is a public speaker. Until 2005, he was president and creative director of Advance.net, the online arm of Advance Publications. Prior to that, Jarvis was creator and founding editor of Entertainment Weekly; Sunday editor and associate publisher of the New York Daily News; TV critic for TV Guide and People; a columnist on the San Francisco Examiner; assistant city editor and reporter for the Chicago Tribune; reporter for Chicago Today.

A sincere thanks to Jeff for this post as I launch my business, website and blog.  My first post is up next. Don’t forget to check out my other friends for great ideas and inspiration,  Richard Binhammer