It was June 14th, 1994 when I drove up to the border crossing between Canada and the United States in the Thousand Island.  Papers in hand, I embarked on a new journey — my American journey.  Leaving a solid career in politics, public affairs and lobbying, I crossed the border, green card in hand, to embark on new beginnings in Corporate Communications.

Along the road of that new venture a highly respected and prominent DC-based business person told me I would never make it in the USA, my skills/background were not relevant.  Perhaps I should return to Canada where my background mattered. My many new-found American professional colleagues and friends, people like you, have proved him wrong. Ya’ll have been most welcoming indeed, says a former Canadian, now American, living in Texas.

Several months after that negative advice, from a home base in Richmond VA (where Mom and Dad and family had settled sometime earlier) I started a new career in communications. First stop, St Louis (as a PR consultant to companies, one of which was Dell and wining a silver anvil in 1997), the gateway (arch) to the west, learning the midwest and living near the Mississippi. Then it was on to the “communications capital of the world,” New York, again consulting in public relations, and learning the North East, not to mention that great city, New York.  And, now here I am, in the south west, first with Dell and now an entrepreneur. Who’d of thought?  A helluva a great journey and a proud American, who still respects his Canadian roots.

American Citizenship was actually obtained in February 2002. Schooled for my citizenship test by Geraldine Ferraro, I scored 100%.  (When I called Geraldine to tell her, her response was, “I expected no less of you Richard” 🙂 ). And then on a cold day in February of 2008, it was off to Citizenship Court to take the Oath and receive the formal papers.  It was a choice to become a citizen.  And, so I thought a celebration might be in order.

With friends and family from Canada and the United States we went from the Citizenship Court to Fraunces Tavern, where George Washington famously said “good bye” to his troops, for a Citizenship Lunch, hosted by Geraldine; then we walked over to the World Trade Center site and paid our respects; onwards to mid town for a (Boston) Tea Party (as in jazz and cocktails); followed by cocktails and dinner in my neighborhood of Chelsea, and then of course, the ultimate NYC experience — an all-night dance at a NYC club, with a good friend and dj spinning great mixes. 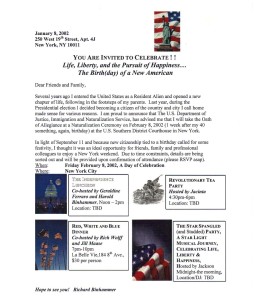 I’m thinking it might soon be time for something like that again, with a whole group of people (including you) whose paths I have had the pleasure and honor to cross since then…although, in some respects, the annual allhat event has some of that flavor (thanks to David :-))

I think we should reflect on this thing called citizenship. It is not something to be taken for granted, whether we choose it, as I have done, or simply have it because of birth or other circumstances, as used to be my situation.

Citizen. What is it? It’s sort of like, lets discuss “being”

According to the dictionary citizen is a member of a state who has full political privileges and protection. Citizenship is the condition of having all civil rights and duties.

I guess that would be equivalent to “being” with some “obligations”.

Surely, it seems to me, that full political privileges and protections, and the having of civil rights merits some duty. And that duty need not be onerous. I think that duty can be as simple as pausing, every once in a while, to treasure, think about and value this thing we call citizenship.

And one of the values is respect and freedom as partially delineated in the Constitution and the first 10 amendments (see Geraldine, I did get it). Respect for diversity, in all that means, including different opinions, lifestyles/orientations, cultures, ethnic groups and religions. Tolerance for differences and freedom to participate with each other, creating our communities.

This seems to me to be a hallmark of the value of citizenship.

I think it is incumbent on all of us to, at the very least, be cognizant of the fact that our being a citizen confers rights and responsibilities that foster the free, tolerant and respectful society we live in — and often we just take this for granted. “ 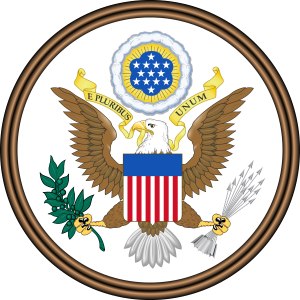 Hope your Independence Day is special. I hope it means something special to you too.  This is a great country; it is why I chose it!

E pluribus unum for sure. Out of many, One! Have a great 4th!!

PS: We will return to the normal  business content following the “national holidays” :-).  Hope you enjoyed a little interlude…or that it gave you chance to think about other things..